On the ride into Chauvigny we found, perched on a hill, a beautiful medieval castle that just cried out to be explored. The castle, flanked by a stunning river and beautiful, green parks, has been slightly restored and now hosts a ‘birds of prey’ show each day in the afternoon. Sadly we didn’t get to see the birds but we did explore the castle a little and enjoy the stunning views of Chauvigny from the hilltop.

The next day we rode through some little town (who’s name now escapes me) and stopped for lunch and to buy hey fever medication; spring was upon us and the pollen was starting to get to me. As we were about to leave we met a bunch of French cyclists out for a day ride. They arrived in single file, some in pairs and each went around to shake the hand of the other, us included, with many a “bonjour”. They were quite interested in our bikes and wanted to know the usual story – when, where and for how long? Some spoke a little english and translated to the rest of group. They were a lovely bunch of people and very happy, it seemed, because the sun was shinning and they lived in France. And who could blame them, France is an amazing place to cycle, it’s no wonder they have the Tour de France. 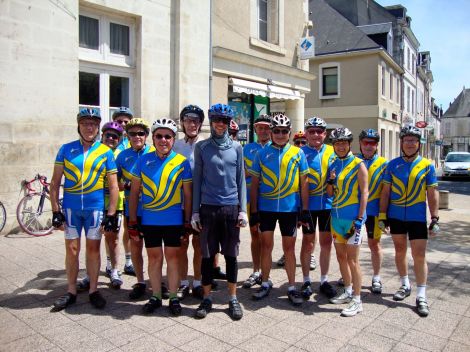 We rolled on into Decize, found the local municipal camp ground and were welcomed by the lovely camp host, Esme. We found a good spot near the toilet block and settled in for an afternoon of relaxing and eating. A little later Esme came by and invited us to have a glass of wine with her, stating that “We are French, we love wine!” Couldn’t argue with that! So we found ourselves sitting on the deck of one of the cabins, drinking red and talking into the early hours of the morning. Emse lived on the camp ground, she loved her job and loved living in Decize because of the two waterways that flanked the town. She also loved to dance and sing and proceeded to give us a few renditions of songs that she had written. When Esme found out that Trace was a photographer she insisted that a photo shoot was in order for the next day.

So it was that we found ourselves staying in Decize for another day. Trace had fun setting up a shoot. We made dinner for Esme that night to say thanks for being the best camp host ever. The next morning we said “au revoir” and peddled towards Switzerland.

Two bikes, one life, and the whole world to see

the only certainty is change

Gear to Survive the Zombie Apocalypse

Adventures of an outdoor athlete, by Andrew Gills

pathways of a wayfarer

Two bikes, one life, and the whole world to see

the only certainty is change

Gear to Survive the Zombie Apocalypse

Adventures of an outdoor athlete, by Andrew Gills

pathways of a wayfarer